Team “Going AWOL” Sally and Meike have successfully completed the 9-day mountain biking challenge JoBerg2c in April this year. Now,  it is time to reflect on the huge personal challenge, the most spectacular South African landscape and  the adventurous endurance race we accomplished.

We arrived in Joburg one day before the start of the race. At Sally’s sister Barbara’s house, we unboxed the mountain bikes and prepared everything for the race. Meike’s pre-race nerves were tested when she discovered that one tyre had popped on the plane and all the sealant had run out. Luckily there was a bike shop close by and the matter was fixed quickly. Sally’s brother in law did some minor tweaks on our bikes and all nerves were calmed down again after a nice supper with Sally’s family in Joburg. 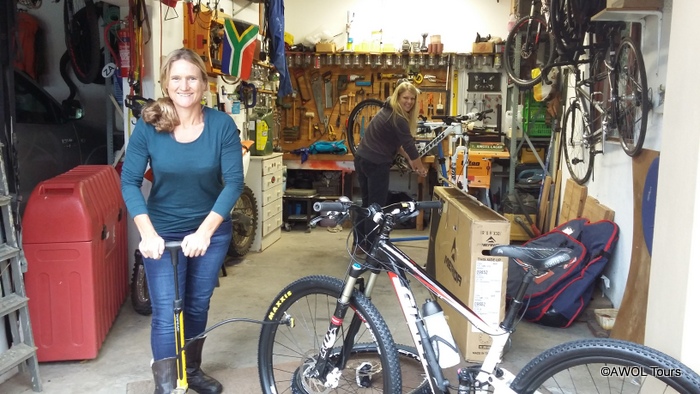 Early on Friday morning, Barbara drove us to the start at Karan Beef in Heidelberg. We were surprisingly calm but poor Barbara, a keen mountain biker herself, suffered from FOMO (fear of missing out!). Finally the big day had come and 800 pro and amateur riders rode through the start line in Heidelberg. The first day was a neutral day with a distance of 116km and mostly jeep track. 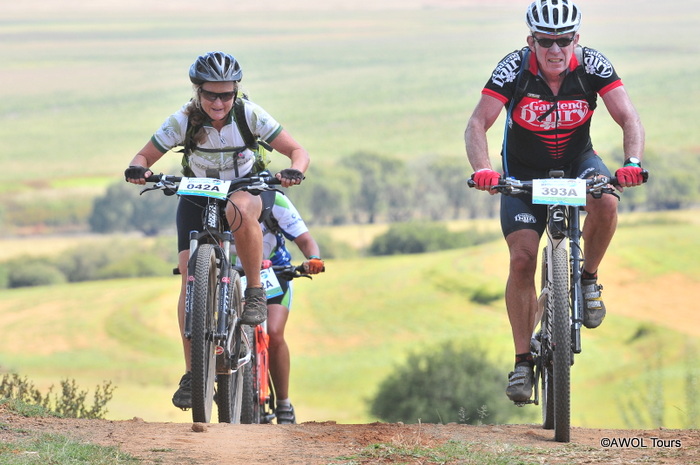 The only real hill of the day was not even that high – Karan Koppie after about 2km was quickly conquered and us AWOL girls took it very easy to save our legs for the 8 days ahead. The mountain bikers rode from Gauteng to the Free State by crossing the Vaal River via a floating bridge. At first we were quite anxious about the bridge as we had heard that there are 3 bridges in total crossing the mighty Vaal River over 400m. We were shocked when we got to the one and only bridge – a mere 40m long – there was not much water left after the terrible drought of 2015/2016. 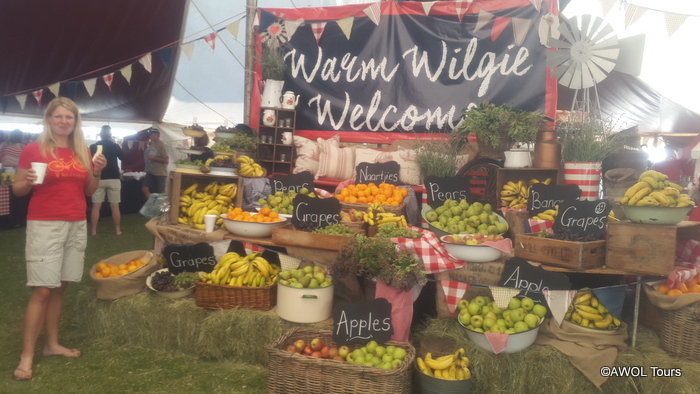 The race village at Frankfort School was absolutely incredible. The women hosting the food stalls had gone out of their way with their decorations of the food tents and there were meals for all dietary requirements. 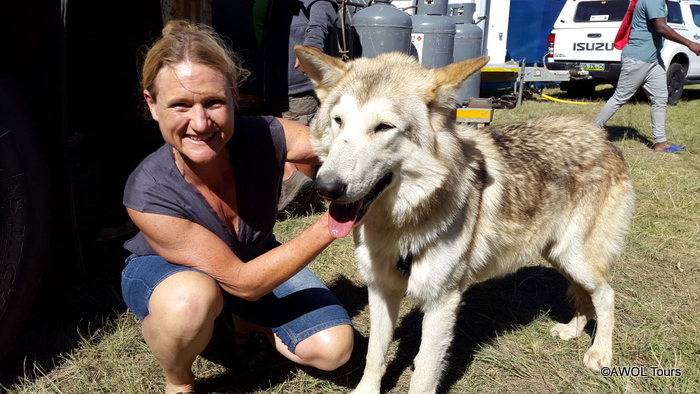 For the pro riders, day 2 is when the racing starts. The rest of us just enjoyed cycling through rural and private farm lands that one would never pass through unless riding a bike on joBerg2c! The first three days of the journey do not include a lot of singletrack and consist of kilometre-munching rural roads. Sally loves singletrails so for her the first few days on farm roads were a bit tough and Meike was close to getting a disciplinary hearing for speeding from her boss. At Reitz, the town hosting the second race village, we came past the Husky Romi Wolf Sancturay and had the opportunity to cuddle with these amazing creatures. 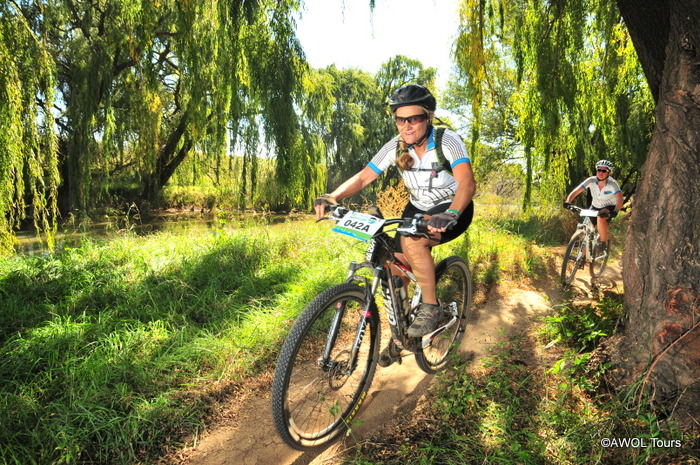 Day 3 from Reitz to Sterkfontein Dam was not a walk in the park – the stage was long and although there was not a lot of climbing, we had to pedal every single kilometre. The highlights of the day were Jabulani Trail (jabulani means happiness in Zulu) and Mount Paul at the 110km mark. The sight of Mount Paul sticking out of the flat tribal land in the distance was beautiful, but it got even better climbing up the awesome singletrack at the back of Mount Paul. In the distance, we could see the Drakensberg and Sterkfontein Dam. 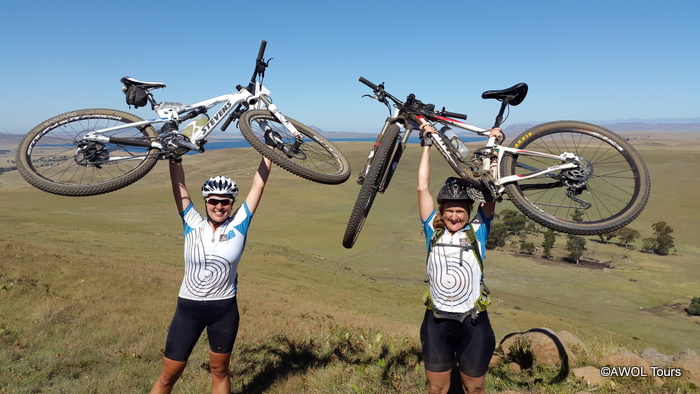 With all the delicious dinners at the race villages and the cold beer at the finish line every day, we recovered quickly after each day. Lamb, Karan Beef Steaks and the most amazing Potjies kept our protein levels up and helped the muscles to recover. Koeksisters, Boerie Rolls and Bananas gave us energy at the waterpoints. Don’t expect to lose weight on an event like joBerg2c! 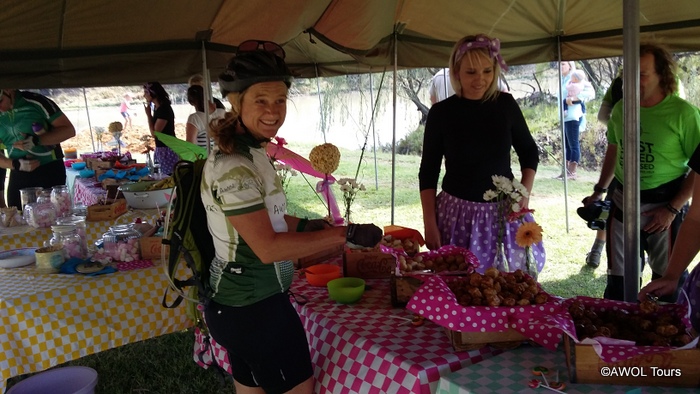 On day 4 we experienced one of the best singletrails we have ever ridden. The first 25km consisted of the ascend up Great Wall My China. It was a nice climb and when we reached the top, the views of Kwa-Zulu Natal and the Drakensberg were so amazing that almost every rider stopped to take pictures. 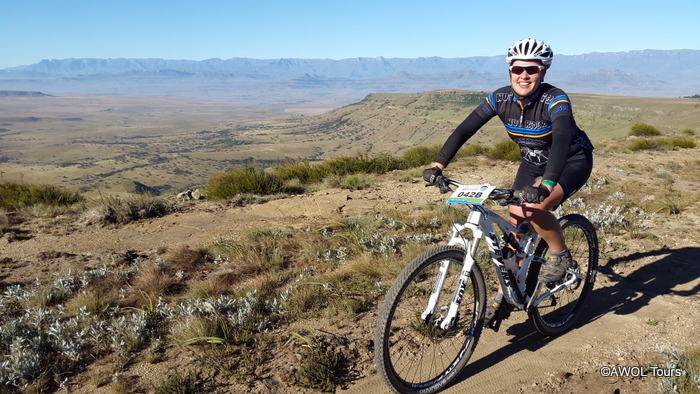 The drop down into KwaZulu Natal from the Great Escarpment via Sollie’s Folly is a masterpiece of singletrack. We could ride it over and over again without getting tired of it. Beautiful nicely flowing switchbacks and a breath-taking view with the landscape of the Drakensberg mountains. What more could you wish for? The area we were riding through is very rich in history. Almost 200 years ago the Voortrekkers moved over the Drakensberg with their ox-wagons and names like Retief’s Klip remind of the old days. Spioenkop is another historic landmark that we cycled past – here battles were fought between the Afrikaaners and the British in the Boer war from 1899-1902. 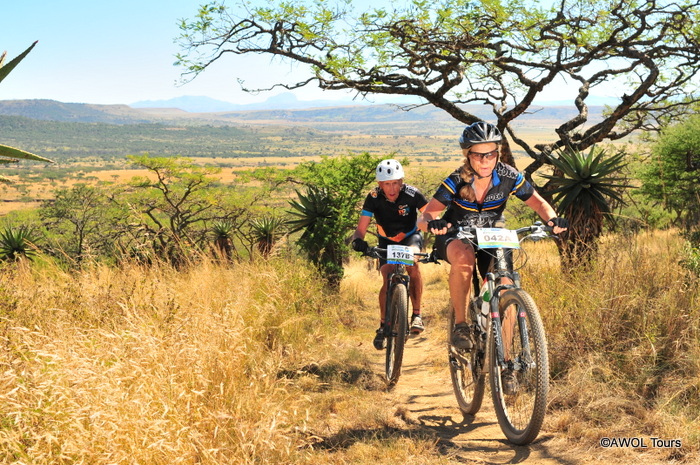 At the end of the stage there was more stunning singletrack waiting for us and the vegetation changed to bushveld. Bone Rattler, Long Drop and Berm City made for proper mountain biking and we crossed the finish line at Emseni Camp next to the Tugela River with big smiles on our faces. 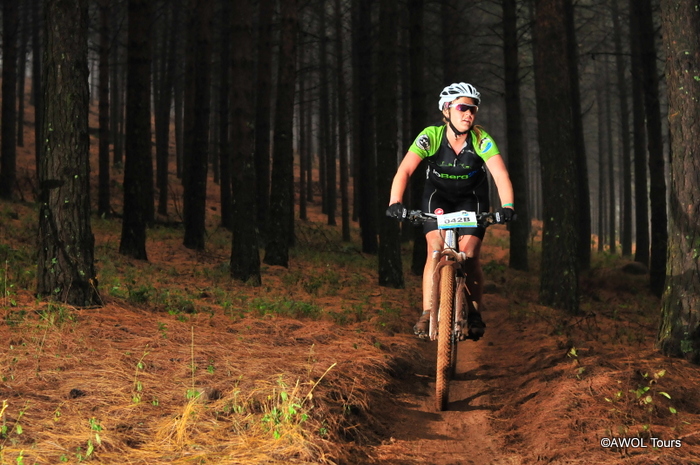 The next stage to Nottingham Road was long: 122km and 2200m of climbing! The whole day was overcast and Meike slacked a bit because she needs solar energy to ride, but soon there were some gentlemen around to give her some pushs up the hills. The first waterpoint at the 61km mark was hosted by “Ze Germans” and a piece of Butterkuchen did the job to get Meike going again. It started raining on the last 20km and we were freezing cold and soaked to the bones. Entering the singletrail to Clifton school there was a bagpiper playing in the forest, and the sound almost brought tears to our eyes as we were so exhausted. The hospitality in Nottingham Road was quite special and at night we sat around the outdoor fireplaces with a nice glass of red wine while chatting to the farmers. 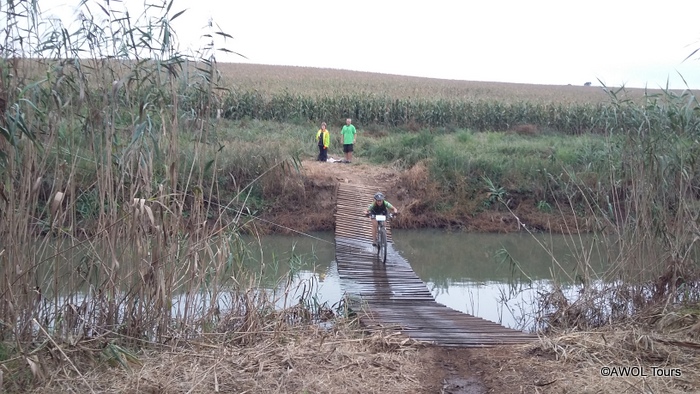 Day six was another ‘toughy’ with 98km of distance and 2000m of climbing. Being used to ride on Table Mountain, we hoped that wearing our Table Mountain Bikers shirts would keep us in good spirits for all the uphills. The first serious hill was appropriately named “Gumtree Climb” – it was so steep that riders would want to sell their bikes on Gumtree after the climb. Of course we kept our bikes and pedalled towards the next section of singletrail happiness – Harrison’s Pass switchbacked downhill into tribal land. 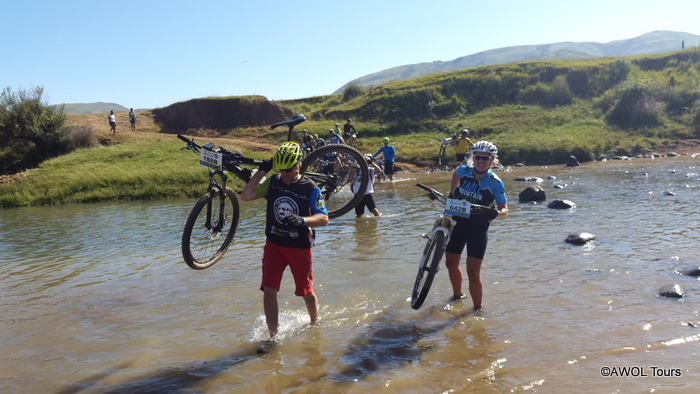 It was Freedom Day in South Africa and there were many village people out celebrating. Especially the women were cheering for us female mountain bikers riding past. It is incredible how the singing and dancing of people you have never met before can boost your energy, even more than any koeksister or banana at a water table can do. With the sound of “Shosholoza” still in our ears we rode down “Rock’n’Roll” before crossing the mighty Umkomaas River for the first time. Slow Poison was indeed climbed slowly, going on and on forever, but finally we reached the race village in Underberg (also the name of a German ‘medicine’ – but we had a shot of Jägermeister every night instead, to keep the germs away). 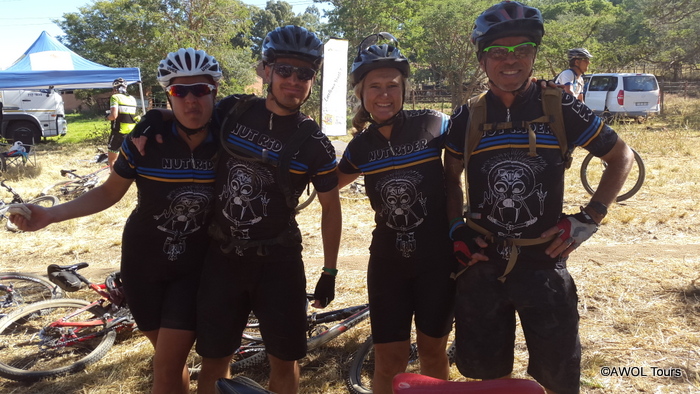 Colourful Zulu huts sticking out of the green landscape of KZN were a common sight on the last days of Joberg2c. Day 7,8 and 9 are identical to Sani2c, another popular stage race in South Africa. Day 7 is a so-called ‘rest-day’. Compared to the days before it was a piece of cake but it still included quite a bit of ascend – and more sensational floating bridges. 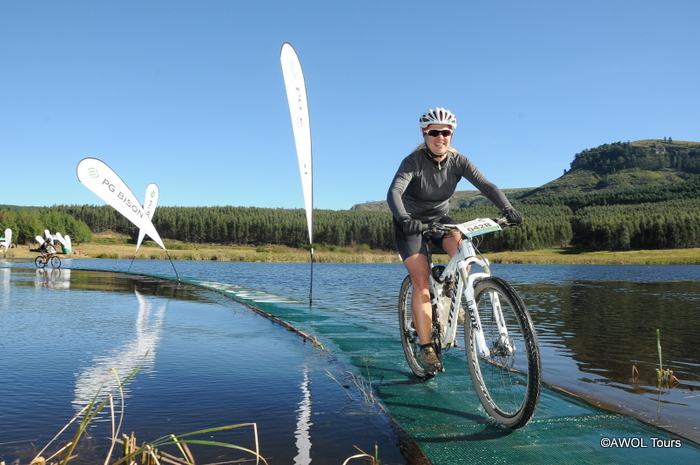 The mighty Umko Drop awaited on Day 8, a fantastic day and after day four our second favourite day. The switchback descents into the Umkomaas River Valley really got our adrenaline going and the organisers had warned us firmly the night before to take it easy and not to get too boisterous on the descent. Ironically, it was Farmer Glen himself who turned up for the evening talk with a bruised face and bloody nose…he admitted that he got a bit over-excited on the descent and then simply ran out of talent. Well, we’re all just human, after all. 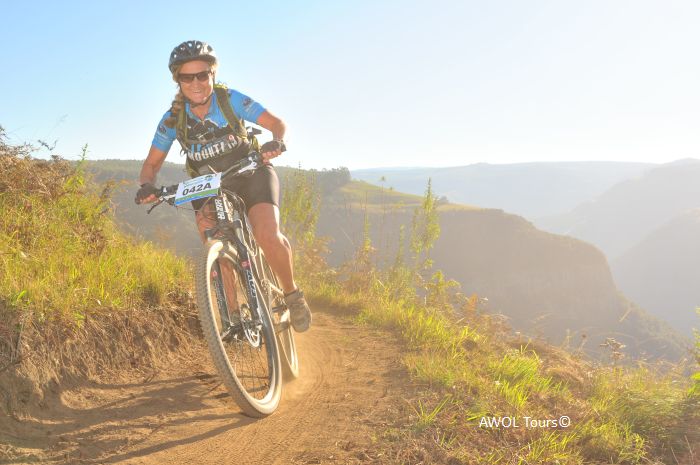 On Joberg2c the destination is less important than the journey, it is about the incredible variation and beauty of South Africa and its people. The three event organisers Farmer Glen, Gary and Wappo provided great entertainment on stage every night and one could really feel how much passion they put into this great event. 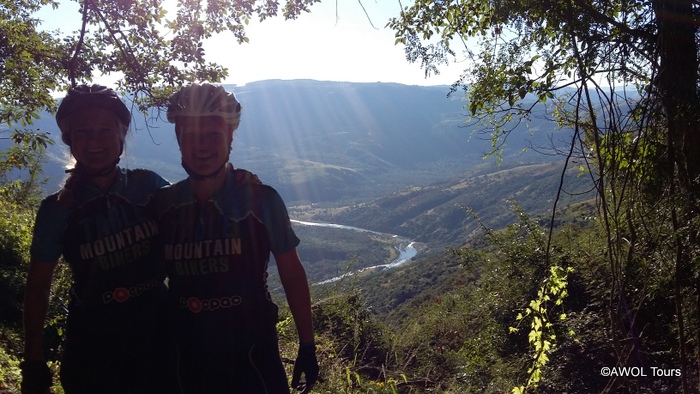 We made friends with some incredible people, the ‘Underberg couple’ with their chicken cycling shirts, the owner of the Big Red Barn bike park who had to ride solo because his partner broke his hand at the start line, the Kokstadt brothers who saved Meike when she was stranded with a flat tyre and no pump, and of course the famous Kenyan “Seeing-Is-Believing” Tandem team with blind rider Douglas and his pilot John. 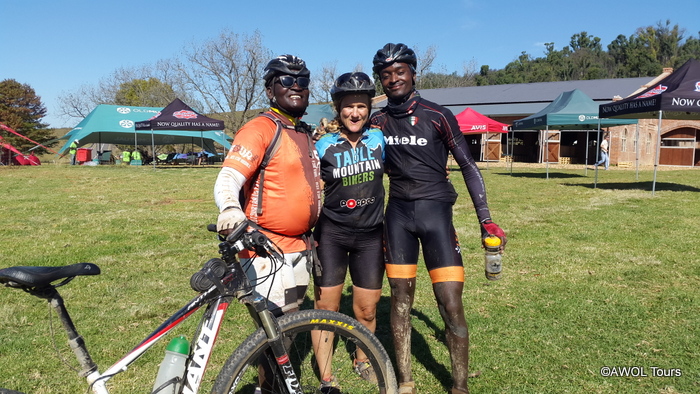 Many riders that we met on the daily stages did not only do the race because of their passion for mountain biking. One rider did the race to overcome the shock of the recent suicide of a family member, who was supposed to be his riding partner on the Joberg2c. Others did the ride to celebrate that a family member had overcome cancer or other severe illnesses. I think that what we can learn from an endurance event like this is to keep moving no matter how hard the present is. 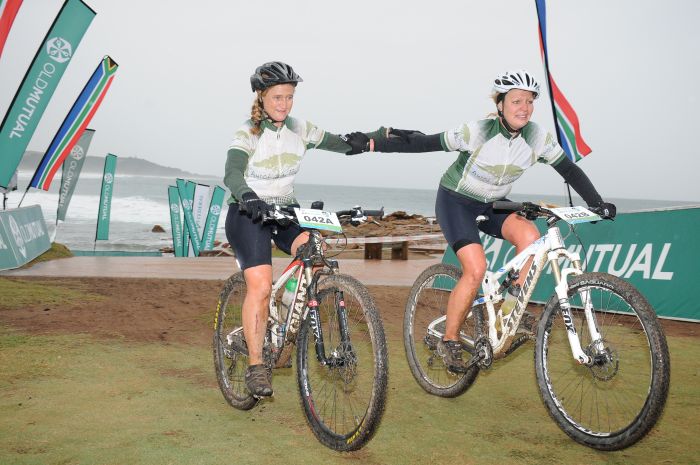 Day 9 was a super fast day with mostly downhills down to the coast at Scottborough, and Sally put the hammer down. This time it was Meike who wanted to give her boss a disciplinary hearing! The last floating bridge to the finish line got our adrenaline pumping again. The wind and the waves made the bridge move in different directions and we had to stay focused one last time. Then we crossed the finish line, looked at each other and both starting crying at the same time. The feelings that overcame us were a mix of happiness, relief and a little bit of sadness because this incredible journey was over. But mostly it was tears of joy and pride – we made it! 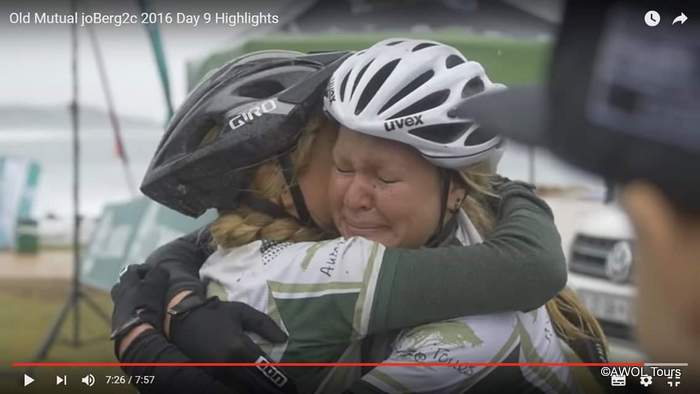 Completing the Joberg2c nine day mountain biking stage race is not a small feat. Just getting fit and ready before the start line is an accomplishment in itself. To complete nine days of racing without injury, illness, intact bike and on speaking terms with ones partner is a fantastic achievement. We now have huge respect for any endurance athlete. For us it was journey of a lifetime and a personal challenge to complete South Africa’s longest mountain biking stage race!