Unfortunately the  iconic Cape Town Cycle Tour, previously known as The Argus, due to take place on 14 March 2021 is CANCELLED. But come and join us at AWOL Tours for the bike ride or hike over Table Mountain! Or support the AWOL Hiking guides in an SPCA fundraising challenge #Trails4tails.

The Cape Town Cycle Tour is the world’s largest individually timed cycle race, attracting as many as 35000 participants at the starting line. It is an annual cycle race hosted in here in Cape Town and is 109 km (68 mi) long. The route usually follows a scenic circular route from Cape Town down the Cape Peninsula and back again to town.

Back in 1978, the race was planned to include a leg into Cape Point Nature reserve, but entry to the Reserve was denied, so the original planned 140 km (65 mi) was shortened to 109 km (68 mi). The race organizers convinced the ‘Cape Argus’ a local newspaper to sponsor the race and that is why the race was and often still is known as ‘The Argus’. 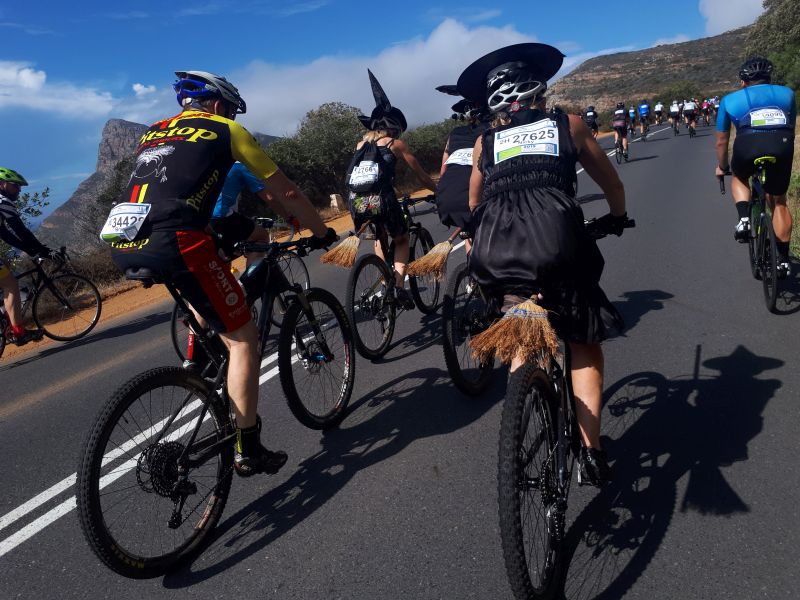 With a lot of things happening or not happening in the world due to COVID19, some people wonder if the race is in fact going to take place next year. Have faith… History has shown that the organisers do not stop or cancel the race on a whim.

The race has been stopped three times due to extreme weather, although in the first two cases many competitors had completed the race before the stoppage, and once significantly shortened due to fire. It has been cancelled once:
• The 2002 race was stopped at 14:45 at Ou Kaapse Weg when temperatures reached 42 °C (108 °F).
• The 2009 race was stopped at 16:30 at Chapman’s Peak due to strong winds, with gusts up to 100 km/h (62 mph) that blew cyclists off their bicycles.
• The 2015 race took place on a significantly shortened route of 47 km to the end of the Blue Route and back, following a major fire earlier that month that led to the closure of Chapman’s Peak Drive and parts of Ou Kaapse Weg.
• The 2017 race was cancelled on the day due to extreme weather. Wind speeds in excess of 100 km/h in addition to fires on part of the route caused the event organisers to cancel after the first round of cyclists had started the race. The threat of possible protest action along a section of the route also increased safety concerns. Participants who had started already were turned back at the end of the M3 highway. In an interview with CapeTalk about the 2021 Tour, the race director David Bellairs said: “We’re playing out three or four different scenarios of the kind event that we may be able to put on next year”. Bellairs says organisers are trying to make sure that they are prepared for all eventualities. He says Cape Town Cycle Tour 2021 will be a responsible event that’s accessible to Capetonians and possibly entrants from further afield. The worst-case scenario would be cancelling the event altogether. Other possibilities include: Potentially moving the event from its usual time of year to later in 2021 or hosting a smaller event with fewer participants or adding a shorter route for other entrants. It is their stated objective to attempt to create an event or version thereof that is acceptable to all stakeholders and affords cyclists the chance to once again stretch their legs in the great outdoors.

So… the race is on and it is time to start training those legs and start prepping your race. AWOL Tours can help with both!

For us at AWOL tours we have thought about and perfected different ways to offer local and out-of-town visitors the chance to ride the Argus. There is a lot we offer. Not only does AWOL offer guided and supported self-cycle tours around the peninsula before and after race day, we also offer logistical backup, itinerary preparation and transport (just to name a few things) for individuals and/or groups on the day. AWOL offers training rides leading up to the race and can assist riders with all their equipment needs and logistics.