I’ve often heard people claiming that cycling is the only way to really get to know a country, and since I finally got my first-hand experience mountain biking from Coast to Karoo and Karoo to Coast on the Garden Route, I can only agree on this. 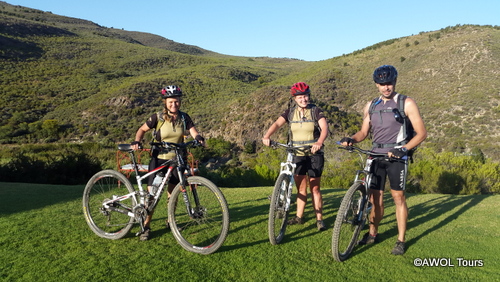 On this AWOL Garden Route Mountain Biking adventure, we tackled some serious Mountain passes connecting the Coast to the Klein Karoo. On the first day, we spun our then fresh legs up the Montagu Pass from George to Oudtshoorn to the top of the Outeniqua Mountains. After only half an hour of cycling we spotted a beautiful bushbuck that was not disturbed by us cyclists at all, only a passing car made it disappear in the vegetation. 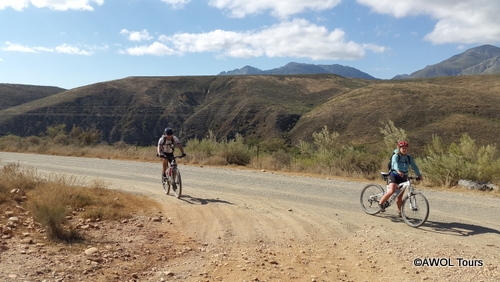 Montagu pass was finished in 1847 as an alternative route for oxwagons. Climbing almost 600m in 10km, I did feel a bit sorry for the poor oxens back then. The steep ascend however gave us the opportunity to admire the scenic beauty of the Outeniqua Mountains while slowly rolling over the cracking dirt road. I had a good laugh when I saw a Dassie trying to sneak through a hole in the stone wall next to the road that was actually way too small for this little creature. 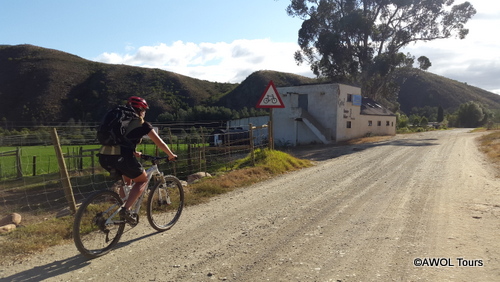 Then it was cycling on undulating roads between ostrich and sheep farms in the heat of the Klein Karoo. We were a bit shocked when we suddenly realised that we had missed a turn-off and ended up in Dysseldorp, not quite on the way to our first camp for the night, the Eagle Falls Lodge. But hey, we’re hardcore and so kept our cool while doing the 35 additional kilometres and fixing flat tyres, and in total we cycled 110km that day. At this point I want to say a special thanks to the Karoo farmer who helped us out with cold water and prevented us from dehydration! At Eagle Falls Lodge we were welcomed with a life-saving cold beer. 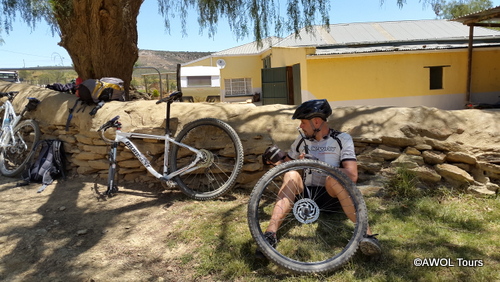 The first half of the second day was quite tough again. With butts still hurting from the epic day before, we had a rough time cycling up the hills until meeting up with the N9. The temperature soon rose to 35 degrees and there was no protecting shade. We stopped in Avontuur at a little Spaza shop and refreshed with cool drinks. The very entertaining lady with passion gap and Karoo-2-Coast shirt sitting on a bench in front of the shop was excited to see us and wished us a lekker ride to our next overnight stop in De Vlugt. Prince Alfred pass started with a nice uphill again, and finally, finally – there it was, the much longed for 18km downhill into De Vlugt. The scenery of rugged rocks, little waterfalls, ancient vegetation and the Keurbooms River was jaw-dropping. 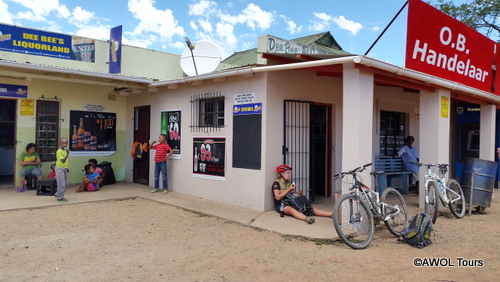 This 68km pass is a masterpiece constructed by the famous Thomas Bain, who was responsible for building a total of 29 mountain passes mainly in the Cape Colony in the 19th century. The funny Tannie in the farm stall at Bain’s cottage served us a revitalising coffee. It is hard to describe the tiny little village of De Vlugt, it just feels like a journey back in time. We stayed in a quaint cottage at Outeniqua Trout Lodge and relaxed our various hurting body parts by lying on the couch after this day’s 65km ride. Looking through the window we had a wonderful view of what would be waiting for us the next day – a steep uphill continuing to the summit of Prince Alfred’s pass. Not exactly what you wish for after 170km of cycling in two days, but we decided to make it next day’s problem. 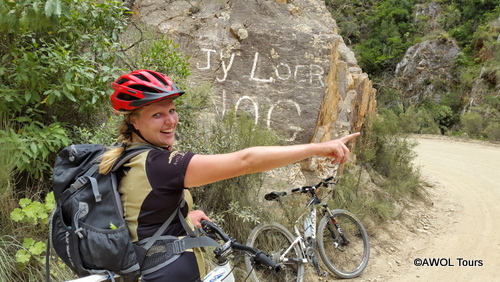 We started cycling at sunrise and soon arrived at the summit of the pass. The 360 degree mountain views were breath-taking and made the ride very enjoyable. The vegetation then changed and we were soon cycling in the lush and dense Knysna forest, on the lookout for the Knysna elephants which we unfortunately didn’t see, but you never know, maybe they saw us! We took Kom-se-pad to go down to the coast, and it took a lot of brainwork to still continue cycling in this heat. I did lose my sense of humour at one point, as it seemed to be only uphill and uphill and uphill. The total elevation gain of Prince Alfred’s pass is 842m. My sincere respect for Karoo-2-Coast riders! 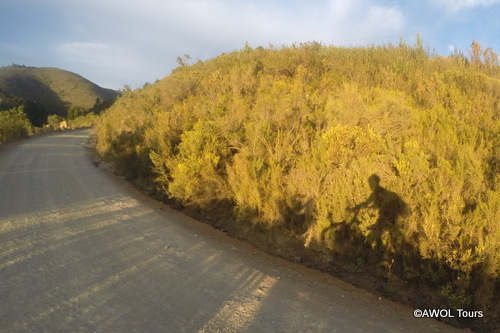 After a lunch break in Knysna and a short ride along the tar road around the lagoon we tackled the Phantom Pass, another 200m of ascend. This is part of the 7-Passes-Road that connects George to Knysna. Luckily Fern Gully, where we stayed on this day, was close by and the owner had prepared a fantastic banting friendly dinner for us. Early next morning we were greeted by a beautiful Knysna Loerie sitting on the balustrades next to our Mountain Bikes. We climbed up Homtini pass even before sunrise. We stopped cycling in Karatara as a huge rainstorm broke out. Admittedly, I was not too sad about this as by then we had cycled a total distance of 265km and climbed 5500m on dirt road already. 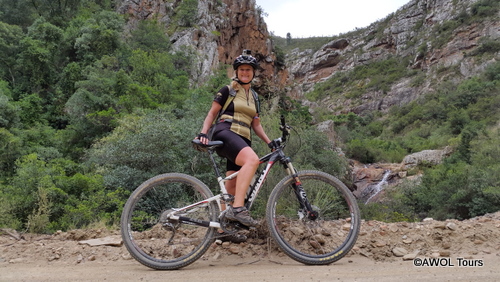 However, the rest of the Seven-Passes-Road is still waiting for us and we would love to invite you to share this Garden Route Mountain Biking experience with us!